The Power of Ownership: How to Build a Career and a Business

Posted on September 5, 2013 by amynienhouse 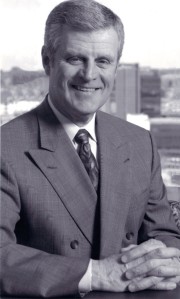 John Bailey founded John Bailey & Associates Public Relations in 1996 and grew it into one of the state’s leading firms serving businesses in the automotive, healthcare, retail, public affairs and professional services industries from its Troy and Lansing offices. His success as an agency leader culminated in the merger of JB&A with Lambert, Edwards & Associates Public Relations – Investor Relations in 2009, creating Michigan’s only statewide firm.

During the event, John will share the story of his success and provide best practices for multiple audiences, including:
1. People stuck in a career or job and contemplating a move;
2. Anyone who aspires to start a business;
3. Those who want to see how someone else did these things to measure their own progress.

John recently wrote “The Power of Ownership: How to Build a Career and a Business,” which follows his 56-year career from inception to retirement including:

John has also supported the Detroit area’s professional, civic and cultural organizations. He is a Leadership Detroit graduate and has been a director of the Detroit Regional Chamber, the Woodward Avenue Action Association and the Automotive Hall of Fame. He was a 12-year board member of the Public Relations Society of Detroit (PRSA) and its ethics officer for six years. He was inducted into the PRSA Detroit Chapter’s Hall of Fame in 2006.

More information on The Power of Ownership: How to Build a Career and a Business is available at:
• http://amazon.com/dp/1482639556/
• http://thepowerofownership.com/
• http://facebook.com/ThePowerOfOwnership
• http://prn.to/18EzmxV

This entry was posted in Events, Programs. Bookmark the permalink.

1 Response to The Power of Ownership: How to Build a Career and a Business